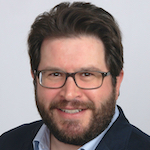 Jared Schatz is vice president of sales for U.S. and Canada at Ross Video. He spends most of his time with the U.S. and Canadian sales teams translating Ross Video's technology into valuable solutions with channel partners and customers. Schatz joined Ross Video in 2005 and has been a key participant in the company’s dramatic growth in the U.S. in various market spaces including sports and television news production. He has over 15 years of experience in the broadcast technology industry, beginning his career with ParkerVision in Jacksonville Florida – a company which brought production automation to television stations for newscast productions.

Prior to joining Ross, Schatz also worked in systems integration with Duncan Video, as well as Pinnacle Systems. He has a master’s degree in economics from Eastern Illinois University.