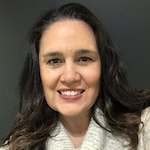 Prior to arriving at Arkansas, Glover began her sports video production career at HuskerVision at the University of Nebraska where she served as the production coordinator. She spent seven years in Lincoln before relocating to Texas A&M University as the marketing manager – a role she held for two years before stepping in to lead 12th Man productions for an additional three years. Glover took a position at the University of Arkansas to develop a video production department. In her role at Arkansas, she has overseen video board upgrades at all venues, as well as an entire production facility inclusive of three control rooms to be utilized for both video board and SEC Network productions.