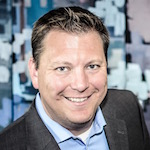 A member of the Grass Valley team since 2008, Robert Erickson has more than 19 years of experience in the broadcast and IT markets with previous roles covering systems engineering, television station management, broadcast network design, and RF transmission systems. Throughout his career, his focus has been on designing and maintaining infrastructure and playout systems based on new and emerging technologies for both existing and greenfield broadcast facilities.

In his current role, Erickson is a participant in the Alliance for IP Media Solutions (AIMS) and advocates for proper implementation of current and emerging broadcast standards on live production equipment. He spends much of his time engaging with customers to educate them on emerging IP technologies and trains internal staff on how IP technology drives different system designs. Erickson also designs and manages IP POC (proof of concept) systems for customers worldwide, testing and implementing solutions based on a diverse product line that includes cameras, servers, routers, multiviewers, various processing nodes, and VM-based software solutions.